As I said in my first post, Hannah was interviewed by Traci with CandyAddict.com because of the art she has created from using M&Ms. Well it turns out someone from My M&Ms had read the interview on Candy Addict and wanted to send Hannah some customized M&Ms as a thank you for her M&M enthusiasm.

After some hunting around by the reps at My M&Ms they contacted Hannah. They let her know they wanted to send her some M&Ms as a thank you. They also wanted to know if their was any particular colors she would like. Hannah said to them that she really could use some white ones. With that, She gave them our mailing address as was told they would ship some out right away.

Almost a week later we got a box in the mail that was clearly from the reps at My M&Ms. The first thing Hannah did when she got home from work at the medical clinic was open the box. Inside some pretty clever packaging she found four bags of purple and white M&Ms. 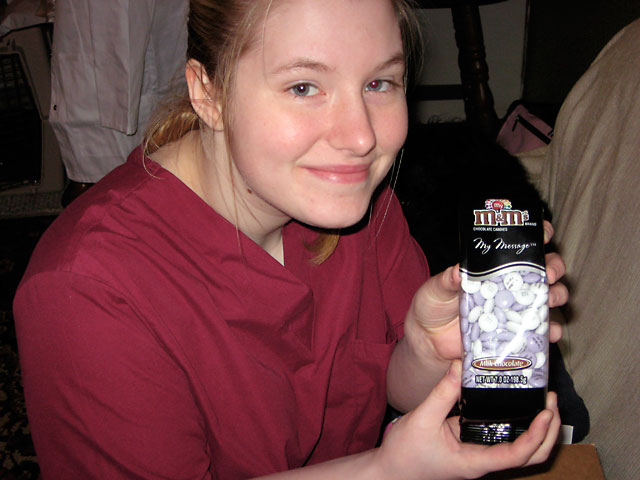 After the excitement settled down we both took a second look at the bags of M&Ms and saw they had writing on them. The writing said, “You Make Fab Art” and “M&Ms Luv Hannah”. She and I just thought that was just the coolest thing.

The Story does not end there. The Next day Hannah got to work on a “Thank You” art piece for the people at My M&Ms. So once again our coffee table became the canvas she works on. By the end of the day she whipped out a thank you using only the purple and white M&Ms she was given.

You can see more of Hannah’s M&M art work by visiting our Flickr page.

Save The Cheerleader, Save The World