While I was at work last week, I came about an old Harper’s Weekly newspaper. The paper was framed and dated August 7th, 1897. I found on the back side, an article about an Anacortes man named William Stanly who went to Alaska during the gold rush. This peeked my intrest because I grew up in Anacortes. The artical reads:

William Stanly, of Anacortes, left his wife only $20 when he went north two years ago. Since then she has supported herself by her own work, sometimes by picking blackberries in the woods. As soon as he could reach  the telegraph office after landing he wired her the welcome news that he had brought back $90,000.

That the new fields are as rich as these miners say there can be no doubt . They pre sent incontestable proof of it in the form of nuggets that vary in size from a pin-head to a $5 gold piece, with occasional ones that are much larger. If there is finer gold in the gravel, they have not taken pains to save it.

Here are a couple of pictures of the framed paper I took with my phone.

I just got back from a week long trip in Washington State visiting family. I took some very random photos with my mobile phone while I was on Guemes Island and Anacorties. I thought I might share them.

We’re back in Juneau after a much needed two week vacation in Washington state.  It was such a fun and relaxing trip visiting with our families. We got to just hang out and visit. It was exactly what I wanted. A stress free trip.

We arrived in Seattle on the 20th of December which was a Saturday. Our plane touched down sometime in the early afternoon. The first thing that Hannah and I noticed looking out the plane window was that there was more snow on the ground in Seattle then in Juneau at the time. We knew getting to our folks house might be interesting because of this.

At the airport we met up with Hannah’s father and older sister Audra. We visited and had lunch with her sister and dad for about an hour which is about the time when her sister had to catch her next plane. She was on her way to California and we would meet back up with her next week.

After Audra left to board the plane Hannah, her father and I drove from Seattle to Oak Harbor where we met up with Hannah’s Mother. The four of us got back in the car and drove to Anacortes and took the ferry to Guemes Island and had dinner with my mom and younger brother Abe. It was so nice to be home.

The snow in Washington was not bad at all when compared to Juneau standers. But it becomes an issue when you think  that none of the roads had been plowed. Everyone was driving a little bit slower and safer. Guemes Island was the worst, I would have to say. In the one week we spent on the island I got the car I was driving around the island stuck in the snow three times. Nothing that bad really. Nothing a little push could not fix.

While we were on Guemes for that first week, Hannah’s folks came over for another dinner and visit with everyone. My brother Abe, put up a festivus pole and the two of us engaged in a couple of games of Axis & Allies. Hannah, Abe, and myself built a pretty big snowman man who eventually fell over after his second day of existence. Poor guy.

The three of us went to the park on the island to try and build a snow fort. But we quickly learned that building a snow fort takes a lot of work. Plus, the snow on that side of the island was not as packable.

The day before Christmas my sister Tracy came from Bellingham with her home made fudge. The snow was bad enough at this point that she could not drive all the way up my mom’s drive way. So, we all went down and helped her carry her things from the car, up our driveway, and into the house.

The next day we had Christmas. Mom instructed Abe to hand out the presents from under the tree because he was the youngest. He was happy to learn shortly after that Hannah was the youngest and that he no longer had the responsibility.

The following Saturday we packed up our things into the car, and said our good byes to my mom and brother and headed out on the second leg of our vacation. We drove to Vancouver Washington where we would end up at another of Hannah’s sisters, Amanda and her husband Scott’s house. The snow had melted quite a bit since we got to the island so driving was much better this time around. The drive was about 5 hours long. There was still snow on the ground in Vancouver, but nothing bad.

When we arrived in Vancouver we were greeted by both Amanda, and Scott. We spent the next hour or so chatting and catching up. Then, one by one the rest of Hannah’s family arrived. Her parents, grandmother, her sister Audra, her brother Shaun, and wife Jennifer with their kids Hailey, and Paige. There were lots of people, smiles, and chatting as everyone got caught up with each other.

In the following days we celebrated Christmas with the whole family. Played gift exchange games and opened our stockings. Christmas dinner was quite the feast and gave us all a chance to chat and thank everyone.

In the evenings everyone but Scott, Amanda, Hannah, Audra and myself went back to their hotels. Scott and Amanda took this time in the evenings to get us caught up with “How I Met Your Mother” thanks to Tivo. It was Awesome! I gave Scott a copy of the film “Never Back Down“. Which is quite possibly the greatest cinematic masterpiece to come out of 2008. Over the course of that week we watch that movie at least two and a half times.

For new years the five of us went out to Applebee’s for dinner and then went back to the house to bring in the new year with some of Scott’s and Amanda’s friends.

The next day Amanda did Hannah’s hair. Scott and I joked around while watching “Never Back down” and geeking out on our MacBooks. That evening we packed up our things and got ready to hit the road for the next day.

We drove back north to Oak Harbor and to Hannah’s folks house. My mom came over for dinner that night and I was really glad I Got to see her one last time before we left for the airport the next day.

We we got back to our place our vehicals where just barried in snow. Getting them out was fun. 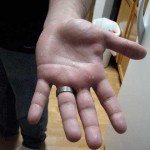 When I used to live in Anacortes, just about every night at 11:30pm I would head over to my friend Adam’s house to watch Futurama. He and I, along with some friends would gather together and spend a few minutes talking about the day. How Adman’s shop was doing. How Chode’s record label and shows where coming along. How work and driving to Oak Harbor everyday was for myself. Then Futurama would come on and we would all get quite and watch it, taking brakes only during the t.v. commercials to talk. It was just a good fun get together that ended each of my days on a high note. 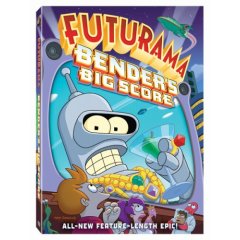 Last month the first new Futurama in two years was released (Futurama: Bender’s Big Score) as a direct to DVD movie. I picked it up when it first came out, but only recently got to watch it because the first copy of the disk I got was a miss print or press. (Not sure what you call it when the disk quits playing halfway through.) In any case, I took the disk back to the store and they gladly exchanged the faulty disk for a new one.

Now, the movie was great! I didn’t feel like any of the writing had changed over time. It really feels like everyone involved in the show the first time around got back together to make this movie and did so with out missing a beat. The movie retains the original comedy style that made Futurama so much fun to watch.

Anyone new to Futurama can pick up this DVD and watch it enjoy it. Anyone who has seen the older episodes will enjoy this movie a little bit more because of all the time traveling that is done in and references to older episodes.

If your a fan of Futurama this is a must have DVD. If your new to Futurama, this is as good of a starting point as any.