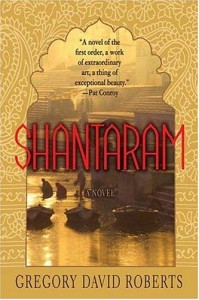 Shantaram is a novel influenced by real life events that occurred in the life of the author, Australian Gregory David Roberts while living in India.

This is not something I would normally pick out and read on my own. My brother Abe, strongly recommended I read it after he had read it himself. Jokingly he told me that when I go to pick it up, the 900 plus pages are going to look and feel very intimidating. He told me he just could not put the book down. Reading over 200 pages a night he quickly finished it.

Being dyslexic, and working a job that requires me to be on call most nights, this book took me the better part of 6 months to read. But it was worth it even though the last few chapters of the book became way to descriptive in my opinion.

Shantaram is a novel influenced by real events in the life of the author, Australian Gregory David Roberts, filled with mostly fictional adventures. In 1978, Roberts was sentenced to nineteen years’ imprisonment in Australia after being convicted of a series of armed robberies of building society branches, credit unions, and shops, which he had committed to feed a heroin addiction after his marriage ended and he lost his daughter. In July 1980, he escaped from Victoria’s Pentridge Prison in broad daylight, thereby becoming one of Australia’s most wanted men for the next ten years.

In the fictional story, Roberts’ main character arrives in Bombay carrying a fake passport in the name of Lindsay Ford. Bombay was only a stopover on a journey that was to take Lin from New Zealand to Germany, but he decides to stay in the city. Lin soon meets a local man named Prabaker, who he hires as a guide but soon becomes his best friend and renames him Linbaba. Both men visit Prabaker’s native village, Sunder, where Prabaker’s mother christens Lin with the name Shantaram, meaning Man of God’s Peace. On their way back to Bombay and after a night out, Lin and Prabaker are robbed. With all his possessions gone, Lin is forced to live in the slums, giving him shelter from the authorities and free rent in Bombay. After a massive fire on the day of his arrival in the slum, he sets up a free health clinic as a way to contribute to the community. He learns about the local culture and customs in this crammed environment, gets to know and love the people he encounters, and even becomes fluent in Marathi, the local language. He also witnesses and battles outbreaks of cholera and firestorms, becomes involved in trading with the lepers, and experiences how ethnic and marital conflicts are resolved in this densely crowded and diverse community.

The novel contains several other characters, notably a number of foreigners of varied origin and local Indians, highlighting the rich diversity of life in Bombay. Lin falls in love with Karla, a Swiss-American girl who refuses to love him back, befriends local artists and actors landing him roles as an extra in several Bollywood movies, and is recruited by the Bombay underworld for various criminal operations, including drug and weapons trade. Lin eventually lands in Bombay’s Arthur Road Prison, where he endures many beatings and other physical and mental abuse by guards, while existing under extremely squalid conditions, along with hundreds of other inmates. However, thanks to the protection of Afghani mafia don “Abdel Khader Khan”, Lin is eventually released, and works in black market currency exchange and passport forgery. Having travelled as far as Africa on trips commissioned by the mafia, Lin later goes to Afghanistan to smuggle weapons for mujahideen freedom fighters in Afghanistan. When his mentor Khan is killed, Lin realizes he became everything he grew to loathe and falls into depression after he returns. He decides that he must fight for what he believes is right, and build an honest life

After reading up on the author, and a little more info on the book’s Wikipedia page, I have come to learn that a movie should be coming out based on the book in 2010. I am pretty exited to see it and I hope I get to see it with my brother.