I have no clue what the HELL came over me or what possessed me to do this. I feel like I had a real ‘Close Encounters of the Third Kind‘ moment. You know the scene where Richard Dreyfuss is eating diner with his family, and he uncontrollably starts sculpting the Devils Tower from his mashed potatoes? That’s how I felt! I just saw these two Apple iPod Touch boxes lying around and I uncontrollably starting building a dice tower out of them with a rubber band, an exact-o knife, and some super glue. It took me about 45 minutes.

I have had dice towers on my mind. They seem like a good idea and a sure fire way to increase the randomness of ones dice roll.

After building the iPod Dice Tower and showing it to my weekly Dungeons and Dragons group, the response was not what I hoped for. Everyone seemed very impressed for the first round of game play, but after that everyone switched back to just rolling their dice on the game table. 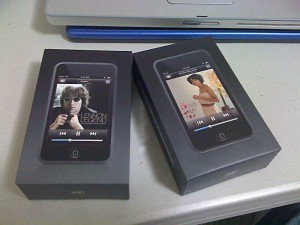 1.) You need to iPod Touch boxes. Not just a top and a bottom but two complete boxes. You will also need an exact-o knife (modeling knife) and Super Glue 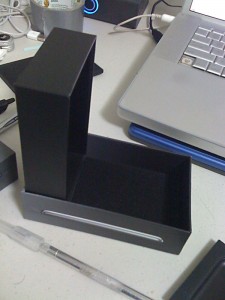 2.) You can see how the top iPod Touch box holds the bottom iPod Touch box insides it’s self. The bottom of the box has a layer of foam attached to it which makes for a soft landing for your dice. 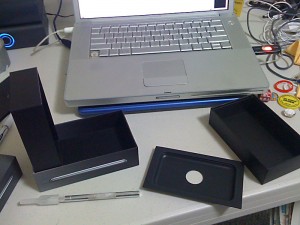 3.) Next we are going to be prepping the hard plastic case that held the iPod Touch still in the it’s box. 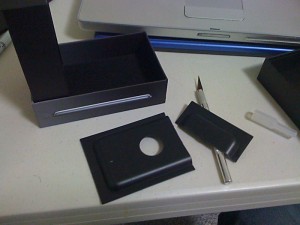 4.) Being very careful with the knife your going to want to cut the top 3rd of the plastic case off. This will be used as one of the “Shelfs” that the dice will bounce off inside your iPod dice tower. 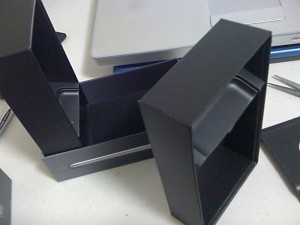 5.) Here you can see how I have attached the 2 cut off sections of the plastic case and super glued them inside the bottoms of 2 the iPod Touch boxes. One close tot he top and one close to the bottom. 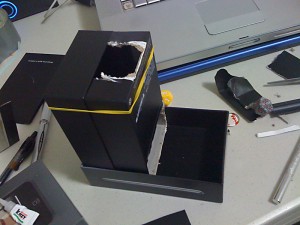 6.) Carefully using the exact-o knife I cut out a square on the top of the box. I also cut and exit hole on the bottom of the same box. Here I am using a rubber band to hold the to bottom boxes together and placed them inside the top of the foam filled iPod Box 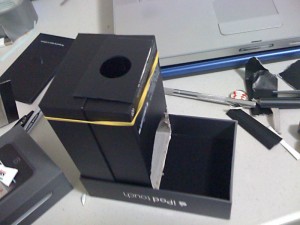 7.) Using super glue I attached the last 3rd of the plastic case to the top of the new iPod Dice tower. The whole in the plastic case just happens to the right size for a standard set of gaming dice. 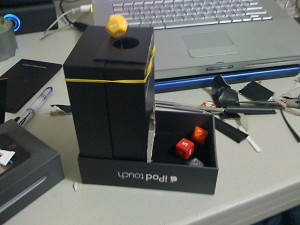