In a previous post I wrote about how I tried out for and joined a local Juneau Celtic rock band calling themselves “Fire on McGinnis”. Since that first post we have been practicing weekly if not more to get current with the groups existing song list. This is something I am having an easier time with then with other bands I have been involved with. Fire on McGinnis has a CD that I am able to listen to. They also go as far as to record almost all of our practices and send out the results as MP3s so you can listen and continue to work on songs on your own time.

I feel lucky that not only have I had a CD to listen to and get up to speed, but the whole group is very professional when it comes to practice time. Very little time is wasted in between songs or working on issues with songs. Everyone gets a chance to give their thoughts on a piece and we work on them till one we all like is agreed upon.

When I moved to Juneau I brought my drum set with me. All my drumming hardware had a few miles on it to begin with and I was hopeful when I moved up here I would find a band right away. Well we all know that did not happen. For the better part of 5 years my drum kit remained untouched and my skills atrophied. I was very close to selling off my drum kit when I did one last search of Craigslist and discovered that Fire on McGinnis was looking for a drummer.

Like I said, time had done a number on my kit. In the first month of practice with the band two cymbal stands and one hi-hat stand broke along with a cymbal. Last week I placed a an order with Guitar Center to replace the stands with new Ludwig stands and one Zildjian Cymbal. The order took one week to get here, but my kit is pretty much back to normal again. 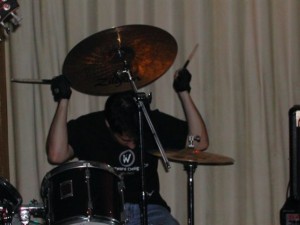