On Saturday, April 23rd 2011 My wife and I where traveling home to Juneau, Alaska from Seattle. We had come to Washington State two weeks prior to have our wedding together surrounded by our family and friends. The end of our trip was punctuated by having to submit to an embarrassing full body pat-down by a TSA agent.

As Hannah and I arrived at Seattle’s international airport the afternoon of Saturday, Aril 23rd everything was going pretty normally. We received our boarding passes and checked our bags than proceeded to the north security check point. A tattooed TSA agent (I feel safe already) checked both of our IDs and Tickets before waving us on. Hannah and I proceeded to the first available line to remove our laptops, shoes, jackets and anything metal into the white plastic bins for X-Raying. My wife was directed to a normal metal scanner on the left and I was directed to go through the body imaging scanner on the right. I looked at the TSA agent who directed me down this path and pointed at the body imaging scanner and said “I don’t want to go through this. I opt out”

“You don’t want to go through this?” she asked

The TSA agent than called for someone to perform a pat-down for a male. I waited for a short moment and was than directed by another TSA agent to the end of the security line where all my belongings where being carried to. I was then told by the agent that he would be performing a full body pat-down. It was at this time I requested a police officer to observe the pat-down.

“You want a police officer?”

The supervising TSA officer came down and asked “You are refusing to be patted-down”?

When on earth did I ever say I refused? Are they just looking for a reason to keep me out of the air port? “No”, I said “I am asking that a police officer be present for my pat-down”

This TSA agent looked just ask shocked at my request as the first one. I can’t be the only person here who feels that this procedure is a violation of my rights and my privacy. I find it so hard to believe that I am the only person who has asked that the police observe this at Seattle’s international airport.

“Hang on”, he said and walked back over to his computer terminal and picked up a phone. When he came back he told me that I could take my belongings and step back out of security, back to where I got my boarding pass and contact the police to have them observe my pat down.

I looked at him with a strange look on my face and asked “When I came into the airport I saw two police officers on Segways. I have to now step out of security and call them? Can’t you just radio them over here?” I was started to get frustrated.

“No” He said “If you want an officer to view your pat-down it is your responsibility to request them. You can gather up your items and proceed back out of security and this agent will follow you.”

It was at that moment the mobile phone in his hand rang. As he answered it the other TSA agent who was going to give me my special touches moments before instructed me to start gathering my things. I proceeded to put on my belt and jacket when the TSA agent on the phone motioned for me stop. He finished his conversation and hung up.

“You will not have to go back outside of security. You can contact 911 from here. Do you have a mobile phone?”

“You can use it to call 911 and request an officer”. he said

I grabbed my phone from one of the white bins and started to enter 911 when I asked “Is 911 the appropriate number for this situation”?

I entered 911 from my phone and hit send.

“Hi, Yes”. I said a little nervously. “I am currently at Seattle’s International airport and I would like to request an officer to observe my TSA pat-down.”

“Please stay on the line”, said the 911 operator. I could hear the line click and ring once before another a new person answered.

“Yes, I am currently at Seattle’s International airport and I would like to request an officer to observe my TSA pat-down.”

“Oh, yeah, sure not a problem” said the 911 operator. “Which security gate are you at”?

“I am at the north security gate”.

“I will have someone there shortly. Thank you”.

“Thank you”, I said and hung up. “An officer will be here shortly he said.” I told this to the TSA agents waiting.

We all waited for the Police officer to show up. When he did appear the TSA supervisor agent greeted him and stated “He wants an officer to observe his pat-down”. Again saying this like it was the oddest request he had ever heard.

The officer came up to me and shook my hand and introduced himself. He then proceeded to stand-off to the side and “Observe” my pat-down. I say “observe” because the officer’s eyes were glued to his cell phone the entire time of my pat-down.

The agent started by having me turn my back to him while he rubbed what I have to assume was the back of his hands down my back side. I Looked over my shoulder at the police officer who was glued to his cell phone. The TSA agent rubbed what I have to assume where the back of his hands over my ass in a down word motion several times. He did this over my cloths. He spent more time on my ass than any other part of my body. I was feeling that this was very inappropriate and became even more nervous.

He eventually continued down to my legs. He felt down my legs and the sides of my legs. He asked me to turn around and he proceeded to do the same thing down the front of my body, but avoided my genitals, but only by an inch or two. When he got to my legs he would wrap his hands around my legs and from just below my genitals and slide his hands down each leg. The whole time he did this I watched as Seattle’s finest stay glued to his mobile phone. Thanks for the help big guy. 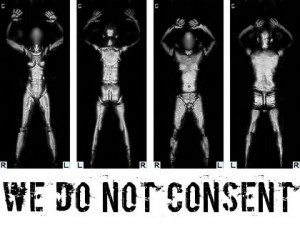 I have been reading a lot about the TSA fully body scanners and the advanced pat-downs users are having to submit to if they opt out. Users experiences of opting out of the body scanners have been scary. Some people are being told they can no longer opt out. Others are being touched inappropriately (Do you think children should be submitted to this?). If you have been reading the same information I have your next question might be; did I feel that my privacy was violated? Did I feel embarrassed? Do I feel I was touched in ways only my wife should ever be allowed to touch me? That answer to all of these is a very strong HELL YES!

The irony of this is that I had my cigar cutter in my pocket the whole time and the TSA agent didn’t find it.

Hannah managed to catch a small portion of my pat-down on video. In the video you can see myself being patted-down and the police officer looking down at his cell phone. I am doing my best to not show how upset I am.

In hindsight I should have written down the police officers name and badge number. I will just have to chalk that one up to lack of experience and try and do better next time. I hope their will never be a next time. This is seriously not right.

As the two of use left the security screening area and proceeded to the elevator we shared our ride down with a custodian. I asked her “Do you have to submit to these full body imagine scanners?”

“Nope” She said “We all refuse to use them”.

How interesting I thought to myself.

Hannah and I both have a friend who is also a pilot for a major airline. He has told us a couple of times that none of the airline pilots will let TSA use the full body scanners on them. I do find it funny that a government trying to implement a system that not even the pilots of the planes that fly in and out of these airports will par take in.

Where does one go from here? Well I have already contacted the airline I flew with and expressed my displeasure in what occurred.  As someone who flew first class and is upset I hope that my voice will carry a little weight with them. I have also contacted TSA and let them know I felt violated. What, if anything will come of my action I don’t know. I just know I am not the only person that feels this way. If we make our voices heard we can enact change.