The Juneau summer this year was not the warmest or the sunniest I have ever experienced since moving to Alaska. They all can’t be winners when you live in the middle of a rain forest.

As fall hits us with a shock the weather has turned cold and the air has become very dry. At the start of October people have had to start waking up earlier than normal to make sure their cars are defrosted and warmed up for the morning drive into work. Before the month was out we got our first real snow fall that dusted the landscape like sugar. 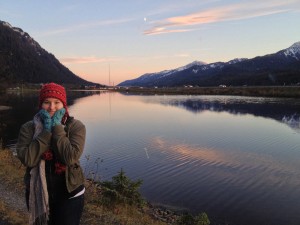 With all the recent cold weather, and the daily continuing loss of sunlight that comes with living this far north, we have had some bright spots too. Most notably is that during the daylight hours we do have they have been bright and sunny. Hannah and I have managed to go for some walks after work all bundled up and trying to soak up some of that natural vitamin D from the sun. We are lucky enough to live really close to a park with a lake, so its easy for us to walk out our front door and down to the lake where we walk the length of it and back.

October is also the month I was born in and Hannah put together a nice little party with some good friends. Some of which flew all the way in from southern Washington State. It turned out to be a great weekend that I don’t think I am going to ever forget. 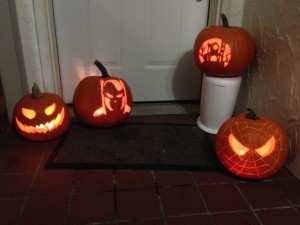 Halloween is also in October, so of course we carved out some pumpkins and turned them into some great looking Jack-o-lanterns. My brother Abe came over and the three of us took to work on four pumpkins. This is the second or third time since I have lived up here that I recall it snowing when we set our Jack-o-lanterns outside. 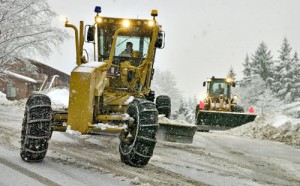 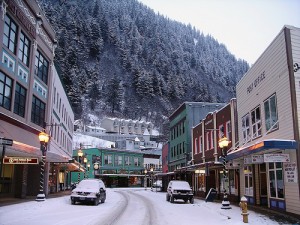 Back in the late 1990s and early 2000s there was a great band located in Oak Harbor, Washington that went by the name of Wearing Black. My own band at the time, Kira’s Modern Mourning, was occasionally lucky enough to play gigs with them in and around the Oak Harbor area.

Wearing Black originally consisted of two acoustic guitar players and an electric bass player. Their music was amazing and it was guaranteed that whatever venue they where playing at, they would fill it up.

‘Root For The Bad Guy’ was one of Wearing Black’s’ popular songs. People at the time loved to hear it and would sing along with the band when they played it. The song is an anthem to all evil doers and bad guy in fictional genres.

The band eventually disbanded leaving only a few recorded songs on-line for their fans. About a year after the band broke up it’s lead singer and guitar player, Saul Nathaniel McCartney, recorded a solo version of ‘Root For The Bad Guy’. Well, I really liked the song a lot. So, over the last 8 months I worked on a type of music video for it and uploaded it to YouTube. I hope you all enjoy it.

I first saw this film in the early 2000s when I lived in Oak Harbor, Washington with my roommate Brannon. One night randomly he brought home ‘The Ring’ and we both gathered on the couch in the living room to watch it.

We knew it was a scary movie, but it had been so long since either of us had been scared by a movie that we didn’t expect this film to change that. With the lights on and sodas in hands we both sat watching this film.

Because this film is older I don’t feel bad talking about parts of the film. The story is  about this weird short film that is floating around. If you watch it you will get a phone call as soon as the movie is over. The voice on the line will tell you that you have seven days to live. So people that saw the film die after seven days.

At the end of the film during one of the climactic scene the phone rings. At that exact same moment my cell phone rang and Brannon and I both jump up from the couch screaming.

It took a second for us to realize what was going on. I pulled my cell phone from my pocket and answered it like this, “You fucking scared the shit out of us! What the fuck is wrong with you! Fuck!”

On the other end of the line I heard my friend Chris say, “What? Are you watching the ‘Ring’?

I hung up the phone. Brannon and I got new drinks and after several minutes of nervous laughter about the whole thing we went back to the couch and finished the ‘Ring’.

This is just a great Halloween movie. If you have not seen it, I highly recommend it. It reminds me of ‘Pulp Fiction’ with the way the story time is out-of-order. I really think this is a sleeper hit that will end up as a classic.

The first time I saw this film was in the mid 2000s with a group of friends in an old run down theater in Bellingham Washington. It was the first showing of the extended directors cut. I was blown away by this movie.

I don’t remember the first time I saw this movie sadly. I remember friends of mine who were obsessed with it in high school. I believe it was through their talking about it that I bought my first copy of ‘The Crow’ several years later.

It’s great! It’s a love story and I am a sucker for a good love story.

After our PAX trip to Seattle, Hannah and I flew to Hawaii for our honeymoon/vacation. When we landed we picked up our rental car, got some groceries, checked into our apartment, and then went straight to the beach.

For those of you wondering, all photos were taken with either a Canon G12 or an iPhone.

My wife and I play this little game whenever we go out called the ‘License Plate Punch’ game. I am sure this game goes by other names through out the verse, but this is what we call it here. I think I started playing it with her shortly after moving to Alaska. I remember seeing a Hawaiian license plate in town and thinking to myself that getting a car from Hawaii to Juneau can’t be the easiest thing in the world to do. I was reminded of playing the ‘License Plate Punch’ game with my friends back in Washington state so when I saw it I reached over and punched my wife on the shoulder. It was not a hard punch mind you. Not the kind that Ralph Kramden would threaten Alice with that would send her to the moon. No, this was more of a tap on the shoulder than punch.

My wife quickly picked up on the simple rules. You see an out of state license plate while driving around and you gently punch the person next to you. 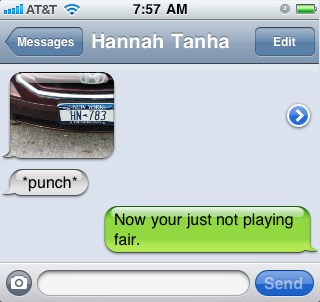 That was all fine and good, but now the problem is my wife keeps making additions to the rules without telling me. Its become a game for me just to figure out what these new rules are since the only way I find out about them is by getting punched. Just recently I learned that I can get punched via cell phone text message. Who knew?

I have figured out some of these new rules. They are: