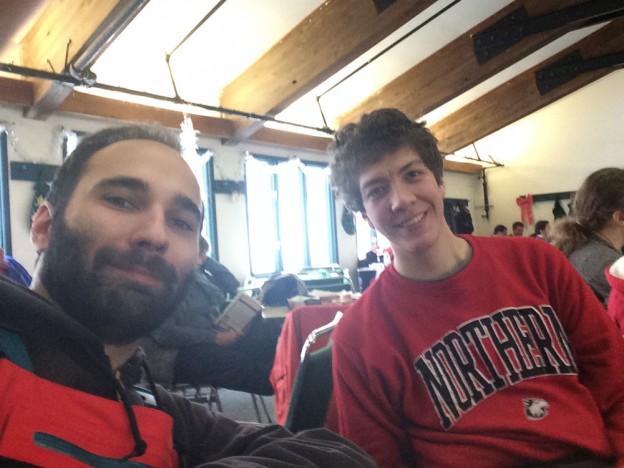 Did you know at 33 years old, I have never once been skiing? For the last eight plus years I have lived less than fifteen minutes away from a ski area and still have never been. All of that changed recently for me.

My Nephew came up here to Juneau, and has been visiting me for the last few days. One of the things he really wanted to do while he is up here was go Skiing and he wanted me to go with him. My younger brother, who also lives in Juneau, was too on my case about going skiing during our nephew’s visit. They both told me I would have a lot of fun and that I just needed to give it a shot. Needless to day, I had my doubts. 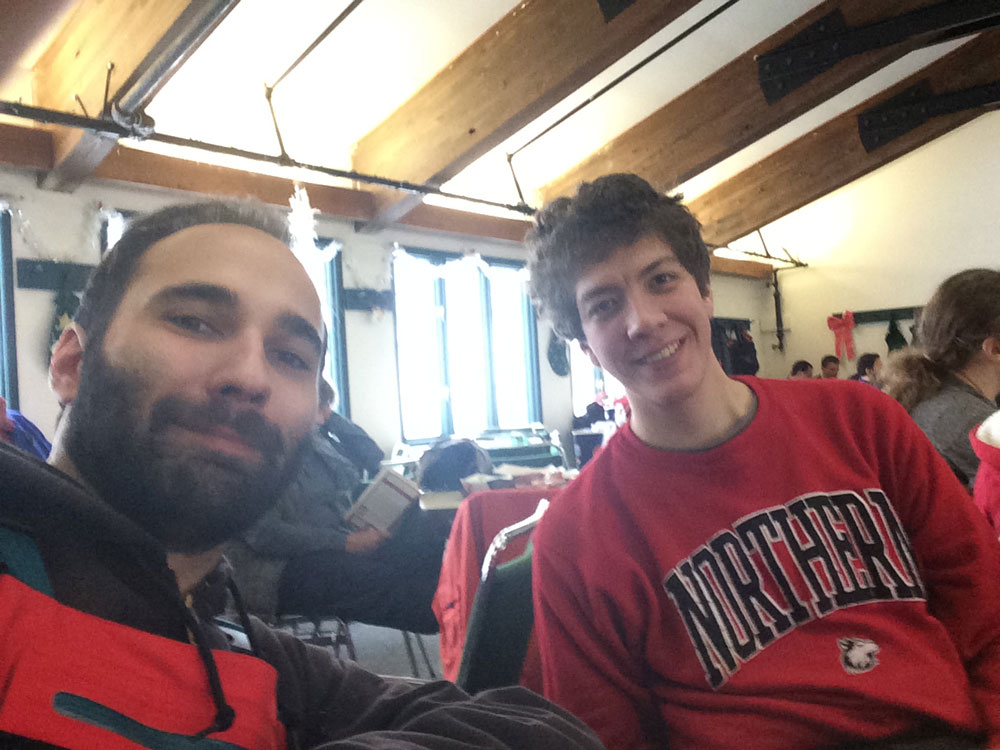 A couple of days after my nephew arrived we headed out early to the Eaglecrest Ski Area where we met up with my brother who works there. The three of us got fitted for boots and skis and headed over to the beginner’s slope. As we were making our way up the snow covered hillside to the beginner’s ski lift my brother gave me some quick lessons. How to put the Skis on , how to “pizza” your skis so you can slow down and how to kick your heals how so you can turn. Once he felt like I got the gist of how it all worked, and I felt somewhat comfortable on my feet, the three of us slid over to the beginner’s ski lift and went up the hill. 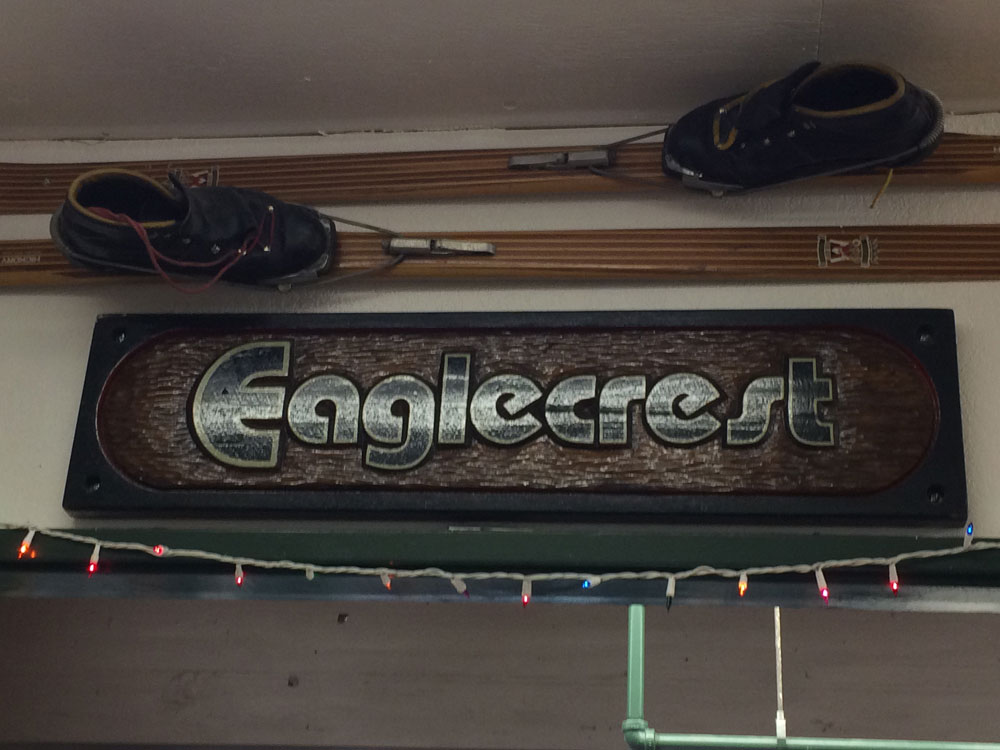 Now, here is where I wish I could tell you I took to skiing like a born natural. That I was able to glide down that hill with the best of them. I can’t tell you that. I fell as soon as we tried to get off the ski lift. Then I fell a bunch more times just trying to get down the hill. But, the truth here is that I had a smile on my face the whole time. It was a whole lot of fun. 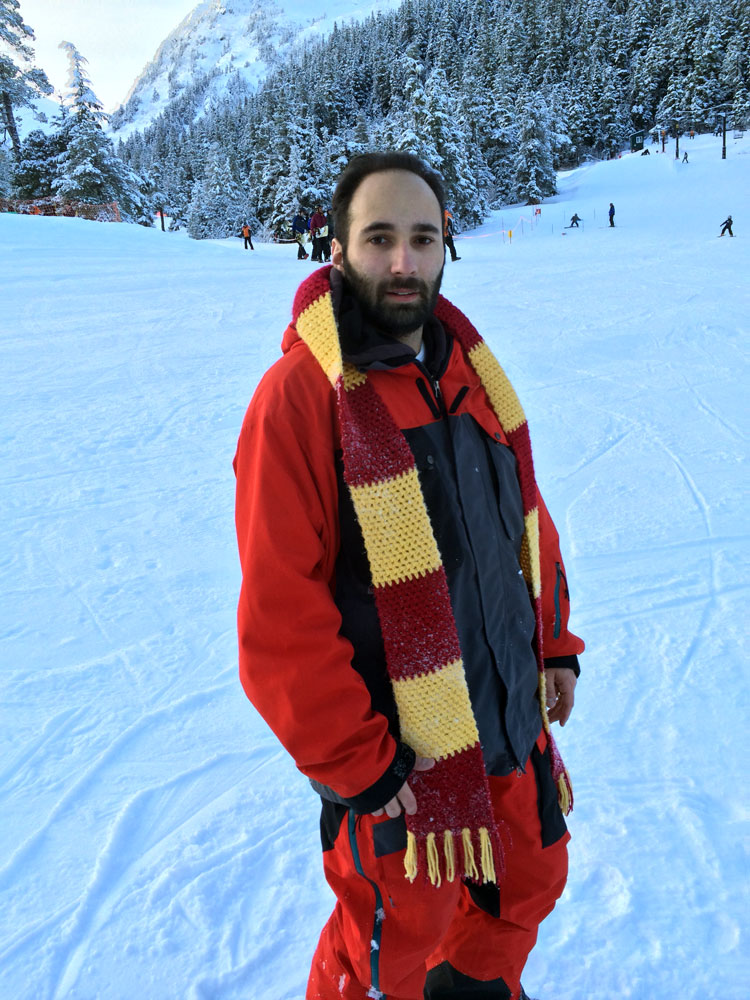 By the end, I was getting pretty decent at skiing. I was able to take the last three runs of the day without falling. I was pretty sore and stiff the next day, but it was totally worth it. I might just have to go skiing again sometime.

Late last week I traveled with my band, Fire On McGinnis to Petersburg, Alaska. We were invited out to Petersburg to rocked their annual Oktoberfest Celebration. It was a challenge for us getting all five members of the band and our musical gear to the town of around 2,800 people. But seeing all the happy people of Petersburg as we took the stage at the Sons of Norway Hall made our adventure of playing outside of Juneau totally worth it. 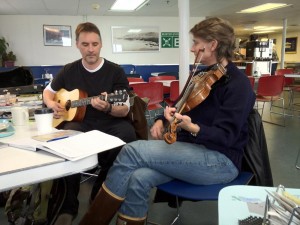 Wednesday even several of us loaded up an old musty orange van with all of our musical gear. We were being careful to load things in a way that would not damage anything during the transport. After the van was loaded Mark, one of our guitar players, would drive the van down to the ferry docks and the rest of us would meet up with  him there before loading up on the ferry for our eight hour boat trip to Petersburg.

On the ferry we all gathered in the galley. With a guitar and fiddle we played music for most of the whole eight hour trip. It was a lot like this. 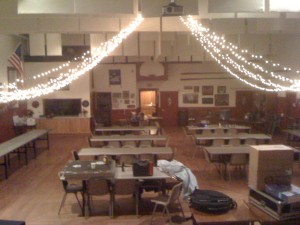 It was after dark when we landed in Petersburg and that did not stop the mayor of the town from meeting us at the dock. He along with his wife took us to the Sons of Norway Hall where we unloaded all our gear and setup most of everything. When we finished that evening we headed to the Tides Inn to crash for the night. We would be staying at the Tides Inn for the next two nights.

When we woke up the next morning we all got some breakfast/lunch before heading back to the Sons of Norway Hall to finish setting up the sound system and performing a sound check. Sound check ran a little longer than normally, but we where in a new place with different acoustics. I was also testing out for the first time a pair of wireless monitors which are just expensive ear buds that act as my monitors so I can hear the rest of the band. They where working pretty well during the sound check. 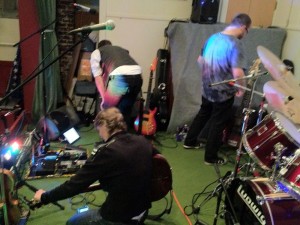 We finished our sound check just as the people of Petersburg starting bringing in their home made chili and beer to be judged at the Oktoberfest Celebration. I had some really fantastic corn bread.

There was some time to kill before we where scheduled to play so Mike, another guitar player in the band, and I headed to the local radio station. We wanted to stop in and thank them for advertising the show and for playing our band’s CD on the air the last several days. 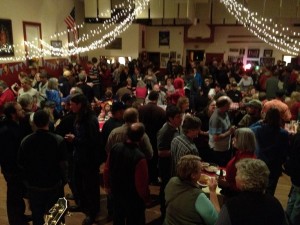 When we returned from the radio station the winners of the chili cook off and home beer brewing contests where bring announced. Once that was finished we took the stage to a packed hall. Our set started off with the normal ‘Bells of Dunblane’ which leads directly into the high energy of ‘Paddy’s’. Not one minute into ‘Paddy’s’ and my earbud monitors slipped out of my ears because I was sweating. They would be useless to me for the rest of the show which was not good because this ment I could not hear the band well. To compensate for this I had to play quieter than I normally do and really follow the visual queues and body language of the rest of the band. This worked out well enough that I made it through the whole show with out making to many mistakes.

We played two sets that night and the high energy of the people of Petersburg kept us all going. They all cheered and danced as we played our music. It was amazing. 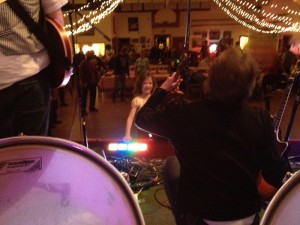 We ended our second set with a song I had not played live before called ‘Snow Light’. At the end of the song each member of the band takes their turn putting down their instrument and walking off the stage leaving only me on stage playing the basic beat to the song on my drums. One limb at a time I stop playing the song. First my left hand which I use to play the Snare drum. Than my right leg stopped hitting the bass drum and finally my right hand stop playing the shakers. I stood up and waved good night to everyone, but before I could get off stage everyone in the hall was chanting “One More Song!” over and over again.

We could not leave like that so we all took the stage one more time to play one of my favorite ‘Fire On McGinnis’ songs, ‘Charlie And The Wheelbarrow’. 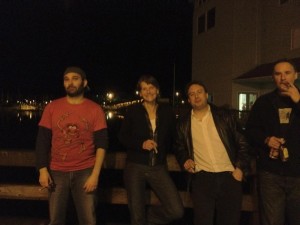 At the end of the night we where all thanked heavily by everyone in the hall. They where so happy that we came out to play and put on such a good show. After the fact I heard that the event raised twice as much money as they did the year prior.

We packed our equipment back up into the old orange van and hung out by the docks. Mike, picked up some cigars and we all had a celebratory smoke as we talked about how amazing the night was. Its not a night, or a gig for that matter, that I will soon forget. 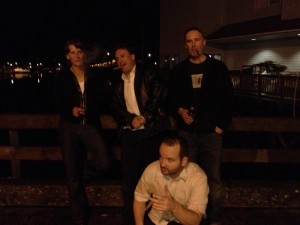 With the van packed up and everything ready for the ferry ride to Juneau the next day we all walked over to a local bar called, ‘Kito’s Kave’. When we walked in we where greeted by everyone in the bar hollering “Hey, it’s the band!” Several people came up to us and shook our hands and said ‘Hi’ and thanked us for coming out. It was clear to me that Petersburg was very grateful to have a night of great food and music.

The next morning Mike and Martha decided to get up early and fly back home to Juneau. Three of us, including myself, stayed back with the gear to catch the ferry home that afternoon. We met up at Seaside House Restaurant for lunch. The restaurant, which was over the water atop pilots, made me quite nervous as it seemed to sway back and forth randomly. The ferry was supposed to leave sometime around 1PM. Mark said that on his way over to lunch he stopped by the ferry and saw that the departure time was pushed back a couple of hours and we all just assumed that the ferry was running late. So we had a long lunch and spent the time talking mostly about how well the show went.

When we got to the ferry we were told that the boat left just after 1PM. Mark said “But the sign?”. The guys in the ferry house came out to look at the sign and admitted that they changed the times on the sign, but failed to update the date. The later ferry date was for next week. So as a result we missed our ferry ride home. Shocked and a little upset we changed our tickets to the next day. Luckily there was a ferry leaving the next day late in the afternoon. The eight hour trip means we would not be back in Juneau till 5:15 Monday morning.

Facing the fact that we where going to have to spend another night in Petersburg we checked back into the Tides Inn for another night. The nice people at the Inn gave us a discounted rate after hearing our tale of missing the ferry. 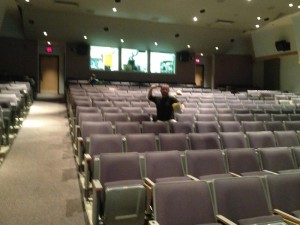 After we got settled back into our rooms Mat, the bass player, and myself decided to go catch a movie. Petersburg does not have a movie theater. Rather the high school students of Petersburg run a program where they bring a movie into town and play it in the high school auditorium. So sitting in the auditorium the two of us watch ‘Contagion‘.

Before calling it a night we also went back to ‘Kito’s Kave’ where the bar was having an 80s themed night with 80s music and most people dressed in 80s garb. It was pretty fun. 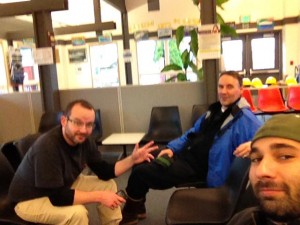 The next morning was a slow and lazy one which we spent loitering around town till it was dark. Than we made our way to the ferry dock and hung out till after 8PM when the ferry finally loaded.

We all had a lot of fun in Petersburg. I have never come into a community and felt so welcomed in all my life. Thank you people of Petersburg for inviting us out and letting us play some music for you all. I hope you will have us out again.