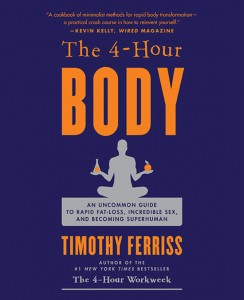 I seem to be getting asked more and more how my diet is going. Ever since I announced that I would be doing the “Slow Carb Diet” described in the Timothy Ferriss Book, ‘The 4 Hour Body‘ friends want to know if I am still on the diet and what kind of progress I have made.

Well yes, I am still on the diet. I have been on it since January 10th of this year and I have lost over 20 pounds as a result. My cloths fit better and I feel better. A little less than a month go I had to take my dress shirts to a tailor and have them sized because they where all to big for me and didn’t fit anymore.

I have been on this diet for 73 days in total and there are a couple of reasons why I think it is working for me. One reason is I can see results everyday by tracking my weight daily and my physical measurements weekly. Using these methods I can see improvements and nothing keeps one motivated to do something then seeing constant improvements. Another thing that keeps me motivated is that once a week I am allowed to cheat. I can eat whatever I want and as much of it as I want. For me this day is normally Saturday and boy do I pig out. It’s knowing that I never have to wait more than 7 days to eat junk food that also keeps me going.

‘The 4 Hour Body’ offers other diets options for people. Not just the ‘Slow Carb Diet’. It’s just the diet I chose and it’s been working. Below you can see a graph of my weight loss compiled from my daily weight documentation I have been keeping.

My battle with weight continues on. I have had no real issues sticking to this diet. I do get cravings but nothing I can’t control. Knowing that my cheat day is never more than a week away is a big help.

As some of you may know I started participating in the slow carb diet described in The 4-Hour Body book by Timothy Ferriss. Some time a week or so ago I saw a recent video of Timothy Ferriss giving a talk at Google that I want to share with you.