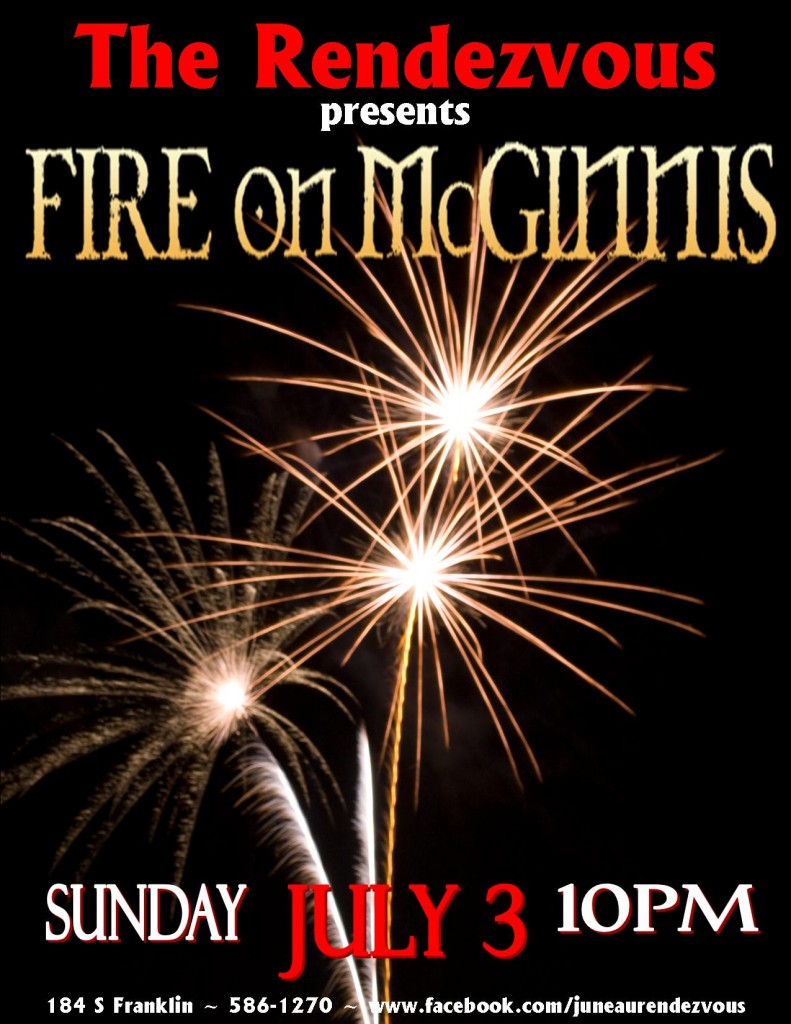 I am pretty excited about this. My band, Fire on McGinnis will be playing a 4th of July show on July 3rd at the Rendezvous bar.

Some of you who are not from Juneau Alaska might be scratching your heads and wondering; why on earth should he be excited about playing a show the day before the 4th of July? Well the answer is this. Because in Juneau its light out most of the day this time of year. The only time it gets dark enough to celebrate Independence Day in Juneau is at 12:01 AM on the morning of the 4th.

I have always had a good time playing shows at the Rendezvous and I am looking forward to this one. So if you happen to find yourself on Franklin street celebrating the holiday come on over to the bar and celebrate with us!

The band I drum for Fire On Mcginnis, has an opportunity to play a roof top gig above the Silver Bow in Juneau this Friday, July 1st. This last Sunday a couple of members of the band and myself headed over to the Silver Bow to check out the roof and to start figuring out the logistics of getting all our equipment up all the stair cases as well as how we where going to get power for all the amps.

My breath was taken away as I saw the view looking over the capital city. I snapped some pictures with my iPhone to share with everyone. If something happens with the weather or whatever that might prevent us from playing I am really glad I had the opportunity to see all this. I don’t know how many people get to look out over roof tops and see what I saw, but it was beautiful.

The band and I now have a mental plan of how we are going to get everything setup and we will be spending the next couple of weeks working with the owner the business so we can make it all happen. Lets just hope the weather works with us. I can’t imagine doing anything cooler right now than playing a roof top gig in downtown Juneau Alaska.

Last Thursday night was my gig with Fire on McGinnis at the Rendezvous. I got out of work late that day and one of my band mates had to haul my drums over to the venue. I showed up fifteen minutes after 5pm and as soon as I got their I started tuning and setting up my drum set as fast as I could then stepped out-of-the-way so the rest of the band could setup their equipment.

By around 6:30 we where able to perform our sound check and everything checked out fine and good. We all wanted to go get dinner so we just agreed to come back by 10pm to start playing at 10:30pm.

I came home and made dinner and hung out with Hannah for a little bit. I also took a few minutes and updated the set list I was given to include my drumming notes. I still don’t have all the songs down 100% and need a little mental refresh for several of them.

Hannah came with me back to the Rendezvous to hear me play. My brother showed up and a couple of friends too. It was encouraging to see all their familiar faces in the crowded bar.

We played the first set and we played it really well. People where dancing and laughing. We where really on that night. Before start of the fourth song I had to stop the band for a few minutes to tape up my fingers. They had blistered and popped and it was getting painful to keep playing.

I once asked the drummer of Local H what he did to protect his hands. He told me he used golfing gloves when he played. I need to make a mental note and go out and try some out.

With my hands tapped up we continued playing and finished out first set. We took a ten minute break and came back to play a second set.

I really had a good time and was grateful to the Rendezvous for letting us play.  They where grateful for us playing as well. Turns out they had such a good night on St. Patrick’s day that they ended up paying us five times more than the original agreed amount.

Hope everyone had a wonderful St. Patrick’s Day.

With St. Patrick’s Day tomorrow my band has been stepping up practices by playing longer and learning new songs. We have a gig at one of the local bars in juneau called the Rendezvous. We have played their before and the people that show are have always been supportive and happy to see us play so I am really looking forward to this show. I understand will be playing from 10:30pm till 12:30am. The only negative thing is that I have to go to work the next morning and am normally up by 5 AM.

Yesterday scheduling a practice was hard but we pulled it off. Hannah had some plans for the day that could not be broken so right after work we just packed up my drum set and dropped it and me off at one of our band members houses where we were going to practice for the day. I sat outside in the cold for maybe 45 minutes waiting for people to show up.  The things we do for music.

I hope some of you can make it to the show tomorrow. I think it is going to be one of our best ones yet!

Sometime late last year I joined a Celtic Rock band here in Juneau called “Fire On McGinnis”. A few weeks ago we played during a celtic festival. I had a really bad head cold at the time so this is really not my best work, but I thought I would share the youtube videos. 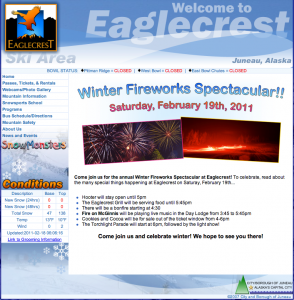 The band I am in, Fire On McGinnis, will be playing a show this Saturday at Eaglecrest day Lodge from 3:45 to 5:45pm. The event being put on by the City of Juneau and Eaglecrest is called the ‘Winter Fireworks Spectacular‘.

There will be a Bonfire, along with a touch light parade and fireworks!

So if you got some time this Saturday please stop on my to hear some great music and watch a killer light show from Eaglecrest!

I own a lot of DVDs. We are talking nearly 500 at last count. It’s sick, I know. Sifting through them all to find the one movie I want to watch has become such a chore that I would rather just fire up my Playstation 3 (PS3) to access my Netflix account and stream something then dig for a DVD of a movie I actually want to watch. So, I have decided that the solution to my conundrum is to setup a Media Center PC. More specifically a Mac Mini media center attached to my T.V. with an interface that even my mother could use.

WHAT DO I WANT THE END RESULT TO BE?

Like any project you should do research into it first. Which is what I did. With google as my guide I sought out other peoples experience with setting up a Mac Media Center. Here are a list of some sites I found that where helpful to me.

I also spoke with friends of mine who had done similar projects. It always helps to read, write, and talk to people about ideas you have. It helps flush out the details of what is trying to be accomplish.

All of these sites listed above where very helpful to me, but none where setup quite the way I wanted. Most of these talked about just using the Mac Mini or the Mac Mini with an external hard drive attached and honestly that probably is the solution for 90% of you out there. But I was looking for a setup with a little bit more free hard drive space for me to use. Particularly because I have several computers in my house and I want them all to be able to back up wirelessly to on location. I also enjoy editing home movies and having a place to store the massive video files I work with is important to me. I think I have come up with a solution that works as you will see.

Most people building a Media Center PC are doing so to encode their DVDs onto a hard drive. If you where just to copy the DVD over to your hard drive your looking at something that takes up anywhere from 2 to 8 gigs of hard drive space. When you encode a DVD onto your hard drive you have the option of removing all the special features, menus, audio commentary, subtitles, and non-english audio tracks leaving you with just the movie. What this means is no more waiting through previews, FBI Warnings or other types of bullshit that is preventing you from watching the movie you want to watch. You just get the movie and your left with a much more manageable file size.

One free peace of software I read about and that everyone pretty much agreed is the best DVD encoding tool is called HandBrake. Before dropping a single penny on my media center I could preform tests to make sure the video is going to look great and be a manageable file size. I downloaded Handbrake and picked a DVD off my shelf at random and encoded it. Using only HandBrake’s presets I found that encoding under the “High Profile” preset rendered out a 1.5 GB file. Playback of the DVD and the encoded movie showed hardly any noticeable difference. It certainly looked a lot better then any Netflix movie I had streamed in the past. If I take the 1.5 GB as an average and multiply that by 500 (the number of DVDs I own) The end result is 750 GB. A very manageable figure.

It’s a very manageable figure till you miss calculate TV shows like I did.

At the time of this post I have encoded several movies and TV shows using Handbrake. Something I over looked is that the average movie is anywhere from 1 and a half to 2 hours, give or take per DVD. Now lets take E.R. on DVD. The DVD for E.R. holds 4 episodes at about 1 hour each. You have 24 episodes a season and that is roughly 24 hours of video which ends up being a little under 1 gig an episode. It adds up! It was something I over looked when I did my initial estimation of how much hard drive space I would need. Don’t let that catch you off guard like it did me. Do the math right so you know how much hard drive space you are going to need to hold your DVD collection.