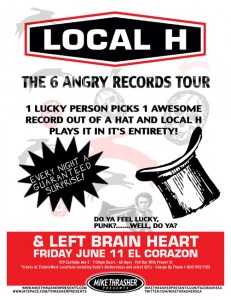 Last Friday was the Local H Concert at El Corazon in Seattle dubbed “The 6 Angry Records Tour.” I was so excited to go and see my good friend Lyle and hear some great music from my favorite band.

I packed really light for this trip. I think I took the least amount with me that I have ever taken on a trip. Just a couple of shirts, a pair of pants, a camera, and my backup PowerBook.

My dad and brother took me to the airport in Juneau and waited around till I got checked in and passed through security. I was shocked when I got through security as saw that the terminal was just packed wall to wall. I have never seen the Juneau airport so full. I don’t know if that is a result of Alaska Airline’s reduced flights in and out of Juneau or if it’s just a really busy travel time.

Eventually I got to board my plan that was running a few minutes late. As I walked up to to the plan I started to see signs stating that this plane had in flight WiFI access. Sweet! However I learned that this was a farce. The passengers of the plane where even told that yes, we would have in-flight wifi access once we got above ten thousand feet. No sooner where we in the air when they made the announcement that in-flight WiFi is not available in Alaska. WTF  Alaska Air lines? It also does not help that your flight attendants on my flight where technological morons. 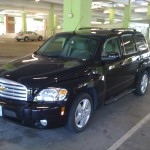 The over all flight however was fine. I sat next to a baby that managed not to cry once! I was able to get a quick nap and was on the ground in Seattle before I new it. Flying over seattle was pretty neat because the city was seen through a giant sucker hole that was gone by the time Lyle and I got to our hotel.

Lyle met me at baggage clam and we took a shuttle to get the rental car. This was my first experience of renting a car and it was a good one. The Car ( a Chevrolet HHR which stands for Heritage High Roof) was a peace of shit. The whole thing is a blind spot. 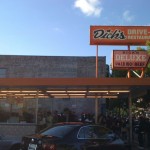 We drove to downtown Seattle and checked into our hotel. From their we walked. It was a great day and perfect for walking and checking out the city. We walked for what I think was three miles to Dick’s Drive-In for dinner. Ever since I moved to Alaska I am always craving Dick’s Burgers. This trip was perfect for getting some.

After Lyle and I finished our burgers and shakes we walked to this used book store called “Twice Sold Tales”. Inside we where greeted by a happy fat cat. We did a quick scan of the books. I looked for some older Dungeons & Dragons books but struck out. 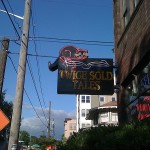 We went through the pat down again and got inside. We then made our way to the bar where Lyle was stopped again because he did not have a current divers license. So out side we both went so Lyle could have a smoke. We got some shit for trying to get back inside the venue. I guess once you enter your not supposed to leave? 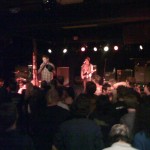 So we are back inside the venue as the opening back for Local H is finishing up their last three songs. I snapped a couple of the pictures of the unmanned Local H merch table and people are starting to come in off the street for the main act.

Scott and Brian took to the stage. Scott was funny as he announced that he just got back from the Cinnaroma and saw Iron Man 2 which he did not like. He stated that Robert Downey Jr. and Jon Favreau where overrated and that the only good movie Robert Downey Jr. made was “A Scanner Darkly“.

Scott also asked a little boy in the crowd how old he was and the boy said “9 years old”. Scott then said “Man, I have said “Fuck” more times then you are old. Fuck, I said it again!”

The thing about this Local H tour is it’s called “The 6 Angry Records Tour” where one person from the audience gets to draw from a hat one of the names of Local H’s last 6 albums and the band will play that album from start to finish. The album that was drawn that night was “Here Comes The Zoo“. I finally got to hear “What Would You Have Me Do?” live which is my favorite song of that album. 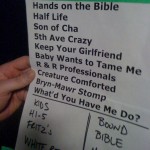 After they finished playing the whole album the band played a couple more of their songs. I snagged a photo of the set list before it was taken away by a fan. 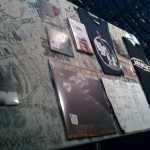 After the last song was played Scott just walked off the stage to the back of the venue to his merch table and started selling shirts and CD’s and giving autographs. I got in line to buy some shirts and when I got up to Scott I showed him my plane ticket and explained I flew down that day from Alaska to see Local H play and that it was worth every penny.

With raw throats from shouting during the concert Lyle and I left the venue and headed to some all night greasy spoon restraint he knew of that made great milk shakes. They where perfect for our tired bodies, soar throats and ringing heads. 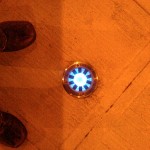 However on the way to this place we found this in the cement sidewalk. What the hell is this? It looks like Tony Stark’s Ark Reactor. Their were like 6 of them.

[Update: 6.25.2010] I met a nice couple at the show who had a something far better then a camera phone to take pictures with. I traded e-mail address with them and just got copies of the photos they took at the show. Blow you will see the new photos.