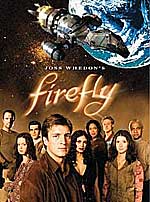 I know i am kind of lagging behind on the Firefly band wagon, but I have to say this show is great! It’s an amazing show that sadly the Fox network canceled prematurely like so many other shows. (Family Guy ring a bell with anyone?)

Firefly is a true Space Western that aired in 2003. The show takes place in 2517 in a whole different star system then our current one because Earth no longer exists. The story line implies that China and the United States ended up dominating earth as the only two superpowers left. As a result everyone in the show can speak English just as fluent as Chines. This a allows the characters in the show to swear creatively so that nothing ever gets bleeped out.

Firefly ended up being canceled by fox because know one could follow it. Fox originally aired the show out-of-order. This was because fox was never happy with the pilot episode and felt the show did not have enough action.

After the show was canceled fans started working together to create Firefly websites and started a postcard mailing campaign to try get the show put back on the air. Eventually the show was put out on DVD, which generated enough interest to convince Universal Studios to produce a feature film, Serenity.

As a fan of the show and the movie I can only hope that they will continue to work to create more films or try and bring the show back on the air. Time will tell.