Waking up on the last day of PAX was slow and painful for not only myself, but for Hannah as well. I pulled myself out of bed and lazily stood up. That’s when I realized it was the damn hotel bed that had been sucking the life out of me each morning. The bed was to soft that you just melted into it. When you tried to get up in the morning it was like trying to pull yourself out of a quick sand pit. We took a shower and tried to wash away the groggy and stiffness we felt. 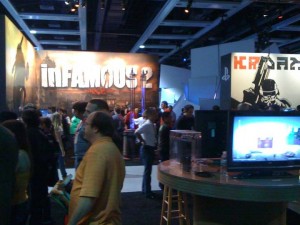 Today Hannah, Lyle and myself planned to meet up and spend most of the day in the Expo Hall checking out all the games we didn’t have a chance to check out before. The highlight for me was playing the new Mortal Kombat. Granted, I did not get a chance to see every game in the hall or play every game in the hall but out of the ones I did, Mortal Kombat stuck out as a favorite for me. This game feels more like MK 1 and MK 2 in it’s play and brutality. I understand it is also going to have a mature rating which will make fans of the game think that the game developers are finally starting to listen after 10 years.

I was so excited to try the demo for Duke Nukem forever. I quickly learned however, that the line for the demo was 2 hours long. I had waited in lines the last two days and I was done with it. So I did not wait to play the Duke Nukem Demo. I texted my friend Alex about this when I learned how long the line was.

Youseph: The line for Duke Nukem is 2 hours long.

Alex: It could be argued that, that line is 15 years long ;)

Hannah found ‘Kirby’s Epic Yarn’ and played the demo for a while. Lyle enjoyed several Lord of the Rings game demos going on and all of us played a hand full of indie games. Hannah really enjoyed one that will be coming out soon called Swarm.

Not to think we where all about computer and console games on our last day at PAX we spent some time at the Chessex booth buying dice (where the frack where you GAME SCIENCE!) and visiting the hand full of venders that had RPG merchandise to offer. 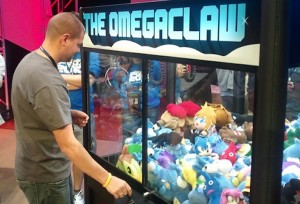 We ended the day and PAX by attending Omegathon at Benaroya Hall. Omegathong is a weekend long tournament of randomly selected attendees competing for a grand prize. The final round makes up the show’s closing ceremony, past games for the final round have included Tetris, Pong, Halo 3, and Skee ball. This years final round was the OmegaClaw. You should have heard the audience explode when this thing was reveled on stage.

At the end of the Omegathon the three of us had dinner one last time. We said our guy byes to Lyle suggested we do this again next year.