We’re back in Juneau after a much needed two week vacation in Washington state.  It was such a fun and relaxing trip visiting with our families. We got to just hang out and visit. It was exactly what I wanted. A stress free trip.

We arrived in Seattle on the 20th of December which was a Saturday. Our plane touched down sometime in the early afternoon. The first thing that Hannah and I noticed looking out the plane window was that there was more snow on the ground in Seattle then in Juneau at the time. We knew getting to our folks house might be interesting because of this.

At the airport we met up with Hannah’s father and older sister Audra. We visited and had lunch with her sister and dad for about an hour which is about the time when her sister had to catch her next plane. She was on her way to California and we would meet back up with her next week.

After Audra left to board the plane Hannah, her father and I drove from Seattle to Oak Harbor where we met up with Hannah’s Mother. The four of us got back in the car and drove to Anacortes and took the ferry to Guemes Island and had dinner with my mom and younger brother Abe. It was so nice to be home.

The snow in Washington was not bad at all when compared to Juneau standers. But it becomes an issue when you think  that none of the roads had been plowed. Everyone was driving a little bit slower and safer. Guemes Island was the worst, I would have to say. In the one week we spent on the island I got the car I was driving around the island stuck in the snow three times. Nothing that bad really. Nothing a little push could not fix.

While we were on Guemes for that first week, Hannah’s folks came over for another dinner and visit with everyone. My brother Abe, put up a festivus pole and the two of us engaged in a couple of games of Axis & Allies. Hannah, Abe, and myself built a pretty big snowman man who eventually fell over after his second day of existence. Poor guy.

The three of us went to the park on the island to try and build a snow fort. But we quickly learned that building a snow fort takes a lot of work. Plus, the snow on that side of the island was not as packable.

The day before Christmas my sister Tracy came from Bellingham with her home made fudge. The snow was bad enough at this point that she could not drive all the way up my mom’s drive way. So, we all went down and helped her carry her things from the car, up our driveway, and into the house.

The next day we had Christmas. Mom instructed Abe to hand out the presents from under the tree because he was the youngest. He was happy to learn shortly after that Hannah was the youngest and that he no longer had the responsibility.

The following Saturday we packed up our things into the car, and said our good byes to my mom and brother and headed out on the second leg of our vacation. We drove to Vancouver Washington where we would end up at another of Hannah’s sisters, Amanda and her husband Scott’s house. The snow had melted quite a bit since we got to the island so driving was much better this time around. The drive was about 5 hours long. There was still snow on the ground in Vancouver, but nothing bad.

When we arrived in Vancouver we were greeted by both Amanda, and Scott. We spent the next hour or so chatting and catching up. Then, one by one the rest of Hannah’s family arrived. Her parents, grandmother, her sister Audra, her brother Shaun, and wife Jennifer with their kids Hailey, and Paige. There were lots of people, smiles, and chatting as everyone got caught up with each other.

In the following days we celebrated Christmas with the whole family. Played gift exchange games and opened our stockings. Christmas dinner was quite the feast and gave us all a chance to chat and thank everyone.

In the evenings everyone but Scott, Amanda, Hannah, Audra and myself went back to their hotels. Scott and Amanda took this time in the evenings to get us caught up with “How I Met Your Mother” thanks to Tivo. It was Awesome! I gave Scott a copy of the film “Never Back Down“. Which is quite possibly the greatest cinematic masterpiece to come out of 2008. Over the course of that week we watch that movie at least two and a half times.

For new years the five of us went out to Applebee’s for dinner and then went back to the house to bring in the new year with some of Scott’s and Amanda’s friends.

The next day Amanda did Hannah’s hair. Scott and I joked around while watching “Never Back down” and geeking out on our MacBooks. That evening we packed up our things and got ready to hit the road for the next day.

We drove back north to Oak Harbor and to Hannah’s folks house. My mom came over for dinner that night and I was really glad I Got to see her one last time before we left for the airport the next day.

We we got back to our place our vehicals where just barried in snow. Getting them out was fun.

We have had cloudless, sunny days all week long here in Juneau. Keep-in-mind that direct sunlight is down to about 4 or 3 hours a day this time of year. But regardless, it sure beats the cloudy, rain filled days we had most of this past summer.

I noticed this week as I drove from my office to different job sites around town that ‘Twin Lakes’ had frozen over. People where playing hockey and ice skating on them. I even saw people ice fishing yesterday. Today I stopped by to to snap some pictures with my iPhone.

When I woke up this morning and went out side to start my car, everything was frozen over. It was clear that the clouds had parted at some point during the night, and with that all the heat they where holding in had gone.  Everyone was driving to work a little slower, a little more carefully then they have had to all year.

On my way into the office I pulled into the Nugget Mall Parking lot. The whole parking lot was white with frost and you could see in the background the snow kissed mountains. It was very pretty this morning.

Tonight Hannah, Zaine and I went out to the Governor’s Open House. We drove into town and parked the truck, and the three of us walked a couple of blocks up to the governor’s mansion. We waited in line with the rest of the public while staff came all through the line with cookies and hot cider.

The line was not too long. Maybe a block at the most. But the line always seemed to be moving and we were never standing one place very long.

When we got up to the front door we were instructed to wait so that guests inside the mansion could exit and allow for more room inside for more guests to enter. After waiting a few moments we were allowed inside and told that we could all stand with the governor and someone would take our picture but we needed to have our camera ready. That’s pretty much what happened. We made our way up to Sarah Palin who smiled, said hello, and shook all of our hands. I then handed my camera over to a staff member to had taken a photo of the person in front of us with their camera.  We all turned to face the camera, smiled and before we knew it we were in the next room filled with cookies.

We all grabbed a few cookies and made our way around the mansion. We went in one large circle. Six rooms in all, if i remember correctly. The pictures and video below tell the story better then I can.

[Update December.10.2008] The local Juneau Empire news paper was updated today with a story on the governor’s 93rd open house since the mansion opened 95 years ago.

Juneau’s Tom Matthews said he turned out for the open house to impress his relatives down south.

“My family in Wisconsin are just so ga ga for Governor Palin I had to get a picture of me with her,” he said.

As the lines of well-wishers trooped through the house, they were serenaded by local school groups and plied with cookies and punch. Many were wearing their newest Xtratufs for the occasion.

Palin spent hours greeting well-wishers with “so glad you could come,” for some and “thank you for your service” for others.

Also on hand were husband, Todd, and daughters Piper and Willow, who handed off baby Trig at times.

[2nd Update December.10.2008] The Boston Herald has a story up on the governor’s open house.

More than 3,300 visitors poured into the Alaska Governor’s Mansion on Tuesday for the annual Christmas open house hosted by Gov. Sarah Palin.

…”Thanks for coming over. Merry Christmas to you,” Palin said again and again to the stream of people over three hours.

Palin, wearing a velvet kuspuk, paid especially close attention to children, crouching to greet them at eye level, holding up the line to ask them questions…

Tonight Hannah and I went to down town Juneau to partake in the Juneau gallery art walk. While we were down there we also bumped into some friends and we all ended up walking the galleries together. Here are some pictures from our night. 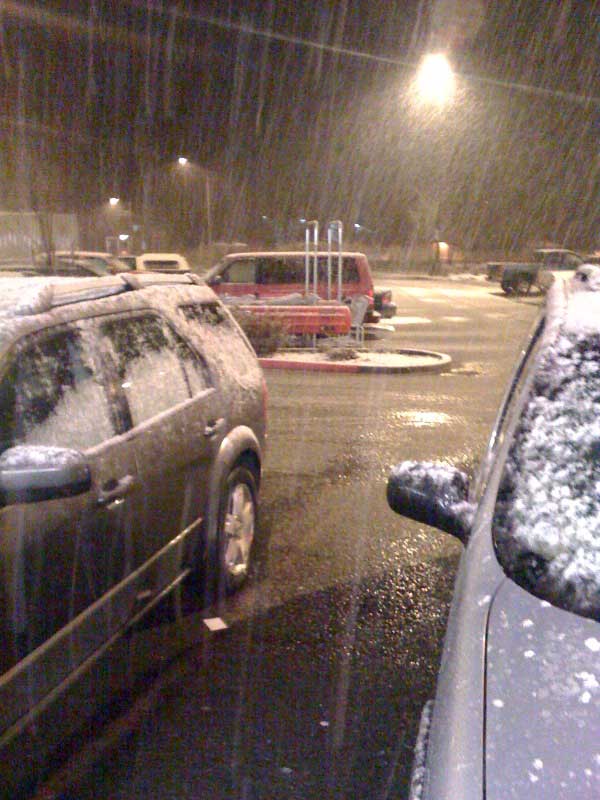 Last night Hannah and I ran to the store. From the time we left our place to the time we got to the store the It started to really snow down on us. We don’t live that far from the store at all either. It was coming down in big, white, thick clumps and sticking to the cars and our cloths. I snapped a few pictures right before we ran inside the store.

Wow! I saw these at Safeway the other day and snapped some pictures with my iPhone. I have not seen Madballs since I was a kid. Who knew they still made them?